No, my boots aren’t cruel on purpose.  It’s my feet.  Over time they’ve become more and more opinionated about the footwear that I force them into, until now it’s become a full revolt.  My feet have non-negotiable demands.  The primary demand is no pain.

Do you know how hard it is to find shoes that don’t hurt these days?

I’ve worn high heels.  There was a time I thought they were really wonderful, though in fact I rarely put them on.  I remember I had a pair of strappy black platform heels that I wore dancing once in the early 1970s.  One time.  I think I threw them out when I got home.

Once I moved out of the city and got involved with horses, high heels were simply out of the picture, though I did have some nice, expensive cowboy boots with two or more inch heels that I wore when I wanted to dress up.

As I got older, my shoe heels got lower.  I became more interested in function and comfort than in fashion.  Not that fashion has ever been high on my list.  Me?  Fashion?  I tell you, when burning of bras came around I didn’t have one to burn anymore.  You think shoes are uncomfortable?  Bras!  ‘Nuff said.

After I hit the mid-century mark, though, my feet started getting serious about what they were willing to put up with.  They got serious about the comfort thing — function and fashion be damned.  Shoes and boots are made for some idealized, non-existent concept of human feet, I think.  Or maybe for beings that hang out in Roswell and Area 51. 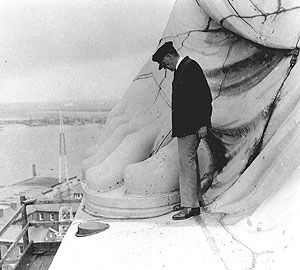 Statue of Liberty has Greek feet

One thing my feet were pointing out was that  my second toes are longer than my big toes.  This isn’t all that uncommon a thing – something like 20-30 percent of the world’s population has beautiful toes like mine.  Some say these kind of toes are an indicator of greater intelligence… okay, I made that up.  But seriously — longer second toes, medically called Morton’s Toe, were an idealized form in Greek sculpture.  Even the Statue of Liberty has a Greek foot.  Notice that Greeks and the Statue of Liberty wear sandals and not shoes.  There’s a reason for that.

But wait, that’s not all.

My pinky toes are curled to the side and under.  It’s genetic.  Thanks, Dad.  The risk of having pinky toes that curl rises when there’s a long second toe on that foot.  Why that should be I don’t know, but I do know that my curled pinky toes were the first to complain about shoe abuse.  Shoes that aren’t wide enough squish those pinky toes under even more and after a while toes that are being stepped on by the rest of the foot start complaining.  Loudly.

Then there’s the heel bumps.  I believe that my bumps are called Haglund’s deformity, bony enlargements on the back of the heels.  Why do these things always have such ominous names?  Stiff  backed shoes , boots,  ice skates, etc.– all of which I’ve worn in my life – will rub on them.  They’ll blister if there’s too much rubbing and enough pressure could result in bursitis there. Oh, and bunions.  I don’t have bunions.  No, I do not.  The word comes from the ancient Greek βούνῐον, meaning turnip.  There are no turnips on my feet. But I confess, my big toes do point a teensy bit toward my second toes instead of straight ahead like they used to.  And yeah, there is this bit of a bump at the joint.  But surely that can’t be bunions!  Whatever, I can tell you this:  my non-bunions will not tolerate pressure anymore.  They don’t want it from too-narrow footwear and they don’t want it from having to flex in the wrong place or to over-flex because of higher heels.

The Statue of Liberty knows.  Sandals make for happy feet.

Fine, but anybody who works around horses knows that not only do sandals make for icky feet, but horses give themselves extra points for stomping on naked toes.  If you wear sandals or soft-toed shoes (like the Skechers that are soooo comfy and that make my feet happy) you will drop logs and such on your toes. Not to mention I’m going down the Grand Canyon in January.  Believe me, the hike is hard enough without cold, wet feet.

So boots.  Hiking boots.  But not just any hiking boots.  I need boots that will not squish, rub, flex in the wrong place, or allow my toes to bang up against the front of the boots when hiking downhill (resulting in black & blue toenails that eventually fall off).

This is why early last spring I went online and bought a pair of  Vasque Coldspark UltraDry Winter Boots.  I bought them then because winter gear was being discounted so spring and summer gear could be sold for the maximum the market would bear.  Plus I bought them then because no matter that the reviews claimed no breaking in needed for these boots, I would definitely have to spend many hours in them before heading off the rim and down to the bottom of the Grand Canyon.

Note that the two other times I did the Canyon I went in Merrell summer weight trail shoes.  They weren’t perfect — while my feet didn’t hurt (much) they were really cold and wet.  Every so often I still put them on and go for a hike, hoping I could get a few more miles out of them but alas, that is not to be.  They’re broken down and falling apart and they really need to be thrown away.

They fit fine in the house but of course the true test would be hiking in footwear for many hours up and down steep trails.  But I wouldn’t know how they’d do for a while.  It was simply too warm at that point to wear insulated boots.  Hiking with hot feet is as miserable in its own way as wet, cold feet are.  Maybe worse, because hot feet are likely swollen feet and swollen feet are feet that get squished, rubbed, and otherwise tortured.

So, with the recent sudden change of weather from summer to fall I’ve decided to start breaking in the new boots.  First I just wore them around the house for a few hours.  Then I went for short walks.  Today I hiked up and down the mesa sides to see how much sliding forward my feet might do.

So far so good.  They’re not perfect, mind you.  After a summer of Skechers that are super flexible and don’t weigh a thing, the boots are clunky and the tops hurt my lower leg.  The balls of my feet are somewhat tender.  Maybe an insert would fix that.  But as-is these boots provide excellent traction, my feet don’t slide, my toes aren’t squished, and my not-bunions are not complaining.