Laura and I were aiming for making it up to the fire lookout tower on top of Escudilla Mountain this coming Friday.  We’re getting closer to our Grand Canyon hike and both of us have been feeling like we need a real test.  The hike from Hulsey Lake up to the top of Escudilla Mountain (or near the top, where the tower is) is about 11 miles round trip.

To compare:  the hike from the top of Bright Angel Trail to Phantom Ranch is 9.9 miles one way.  The altitude change at Grand Canyon is the big deal. It’s 4380 feet from the rim to the Colorado River.  Hulsey Lake to the fire tower is “only” an altitude change of about 2200 ft.  Of course, the tower is at something like 10,866 ft, so that counts for something, right?

Plans change, though.  But more on that later.

Rant: Why why why do we humans do what we do?

I’m trying hard to not let myself get outraged every time I see the destruction caused by the 2011 Wallow Fire.  So much of the forest is gone forever (well, at least my lifetime) and it’s there, in my face, every hike up from Hulsey Lake. We aren’t getting as much precipitation in the southwest as we used to.  Aspen is taking advantage of the newly available real estate but there’s little evidence of regrowth of conifers.  It makes me crazy that people (read environmental nonprofit organizations that do no environmental work other than file lawsuits) have been so dead-set against logging that the USFS has not been able to maintain forest health through thinning or reduction of hazardous fuels — so now whole forests burn down and wildlife is killed and, oh yeah, homes and human lives are taken, too.

And it’s too late now.  The problem can’t be fixed, even if there was a way through the bureaucracy and litigation. Mother Nature has reacted to what we created with our socio-economic/political approach to management of natural resources, which may benefit humans in the short run but it sucks in the long term. The forest’s gone and it’s uncertain if it will ever come back.

But enough of this, I’m getting myself all worked up.

I’ve learned to look between the dead skeletons to the land itself, to the long views of ridges and valleys that we can still hike, and the far distant mountains that call to me.  I don’t think of myself as someone who wants to be at the top of mountains, but if and when we get to the Escudilla fire tower we’ll be very close to the peak of the third highest mountain in Arizona. If it’s clear we will be able to see as far as Flagstaff, something like 100 miles away.

That’s worth a lot. I discovered a major thing… alternative lacing.  Experienced hikers will no doubt roll their eyes (duh) when I say I have just now, after all these years and so many miles, discovered that I don’t have to lace my boots the way they were when I brought them home from the store.

Yes, it’s true!  I can lace my boots any old which way I want.  There are no lace police to stop me.

I should have guessed as much.  I mean, kids walk around with their laces just flopping rather than being threaded through those holes and hooks and D-rings.  It took a long time for my brain to connect what I had seen with my desire for happy feet. When I finally did, naturally I googled it.

Of course there are YouTubes and, for those of us who can still read, web pages with instructions on how to lace hiking boots.  As I’m a fan of learning via reading rather than by watching, here are a few links for you to try out: REI, Backpacker, and GoreTex. They’re not the only ones, of course, but hey, you can Google it yourself or find some YouTubes to look at.

So, about that lacing.  Apparently there are not only alternatives for that, but there are options for tying those laces.  Who knew!

I have been experimenting on my Vasque boots and my Skecher hiking shoes.  Surgeons’ knots!  Window lacing!  Boot heel lock!  But wait — there’s more!

Last time Laura and I did the long hike at Hulsey Lake in AZ when I was wearing my Vasques, I got a heel blister from rubbing.  Little did I know that the cause is the same for heel blistering and feet sliding forward in the boots and smashing big toes (at minimum – my smashing involves three toes on each foot).  I discovered that I needed to lock in my heel, which I had attempted to do by just tightening the heck out of the laces, thereby causing all sorts of discomfort while not actually solving the problem.

So I studied the advice and then I relaced.  I hiked some, then changed the configuration several times till at last — oh my!  Hiking boots that fit like socks, with lots of wiggle room for my toes but without my foot moving all over the place.  Zowie!

I also figured out that there’s a reason for hooks being where they are, and D-rings, and plain holes, and leather lace tubes… they’re not just for decoration. Why don’t boots come with instructions? I decided to dig out my old Osprey backpack.  It’s old in years, but not that old in miles.  I haven’t used it since a week-long hike in the Gulf Islands, less than ten years ago I think, but still.  It’s been mostly stashed in a bottom drawer of a chest that otherwise contains fabric for wall hangings.

The day pack I’ve been using just isn’t working for me.  It’s meant for someone who’s taking a stroll rather than someone who’s going out for a whole day and might need to haul some real stuff along, like first aid, water, snacks, gloves, extra vest, emergency blanket (the foil kind), and last but not least toilet paper. Having to dig around to find what you want means that you have a hard time finding anything.  It means taking the pack off for the least little thing, like throat lozenges.

The day pack also was uncomfortable loaded up.  I never could find a comfortable balance between the weight carried on my hips vs. on my shoulders.  I suspect that is partly because the day pack isn’t long enough for my back, but no matter.  Not enough easily accessible pockets means it’s a reject for Grand Canyon.

I thought the Osprey would be overkill for a day hike, but it turned out to be wonderful not loaded down like it was when we hiked the Canyon ten years ago.  Then I was carrying everything I needed for three days.  Now I’m carrying just what I need for a day hike because we’re getting our overnight stuff down to Phantom Ranch via the mule pack train. 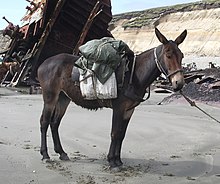 Hey, why not?  Mules gotta earn a living, too.

So now we’re not going for the fire tower on Friday.  Laura’s had something come up and needs to stay home that day.  Plus yesterday we accidentally went for a ten mile hike.

Laura lives about four miles from me.  Sometimes we hike out from our houses and meet halfway.  Yesterday the intention was for us to meet up so I could give her some KT Tape to try for a pulled muscle.  Each of us would then get in a quick four mile walk while accomplishing an errand.

It’s a measure of how conditioned we’ve gotten that after I handed her the tape and we chatted about that for a moment, I mentioned that I had planned on walking a little further just so I could rack up a bit more distance.  Well, when we got to the first logical turn-around point, we decided to walk just a bit more.  And then after that bit — a bit more than that.  Ultimately it amounted to over nine miles of hike, and when added to my ranch chore steps my Fitbit told me I had covered 10.55 miles yesterday.

What with Christmas prep plus my getting ready to welcome a dog back into my life (a story for another time), we’re putting off the fire tower hike till another day.  I’m not too worried about the change in our training schedule.  I think I’ve gotten the equipment issues mostly settled and my capacity to hike the distance needed has been reached.

But the up and down, that’s another thing.  That’s the real challenge of Grand Canyon, after all.  It’s not just a hike in the woods.