US Air Force OK with destroying the Gila Wilderness

“A wilderness, in contrast with those areas where man and his own works dominate the landscape, is hereby recognized as an area where the earth and its community of life are untrammeled by man, where man himself is a visitor who does not remain.”  Wilderness Act of 1964 (Pub.L. 88–577)

The Gila Wilderness was designated the world’s first wilderness area on June 3, 1924.  If the US Air Force has its way, it’ll become a burning trash dump.

A Holloman Air Force Base proposal would create a new military operations area (MOA) over the Gila and Aldo Leopold wilderness areas of the Gila National Forest (and over into Arizona, too). The Air Force wants up to ten thousand F-16 flights per year (that’s more than one an hour 24/7), dropping  flares and chaff as they fly over.

The Air Force didn’t think to bother notifying the public* where the MOA is proposed (Grant and Catron County in New Mexico) about this idea.  Instead the Air Force held meetings in other municipalities nowhere near the directly affected area.

Pretty sneaky, if you ask me.

So what will happen if the MOA goes through?

You mean the screaming of jet planes constantly zooming over what’s supposed to be wilderness (“in natural condition” 11 U.S.C. § 1131(a)) isn’t enough?  Well, there’s more.  Such as the trashing of the forest.  Literally.  The Air Force wants to drop chaff and set off flares (military aircraft often combine chaff with flare dispensers), carpeting the forest with military debris and maybe just burning the place down.  How much chaff and flares I don’t know… maybe that is in the Air Force’s environmental impact statement (EIS).  But with up to 10,000 flights a year I’m thinking we’re talking tons. Chaff is meant to confuse radar.  It’s made of millions of tiny aluminum or zinc coated fibers that are ejected from a jet and then are blown around by the turbulence of the jet’s wake and from whatever wind there is that day.  It can end up far from the release point.

Chaff fibers are about the thickness of a human hair and range in length from about a third of an inch to around three inches long.  The fibers are dispensed in cartridges or projectiles, so it’s not only chaff, but the debris from the containers (paper, cardboard, styrene caps, pistons, and other stuff) that ends up on the ground.

Once the chaff and debris is on the ground, it can be blown around by wind and updrafts from wildfire.  While inhalation is not considered to be a major issue (by people who don’t have to breathe it), wild animals will inevitably consume the chaff because it will be everywhere.  It will blanket the forest floor, the plants, and the animals themselves (not to mention hikers, bikers, hunters, and campers) with metal coated glass fibers.  And let’s not forget that these fibers and associated debris will also pollute the streams… water that ultimately will end up in Phoenix, AZ.  But hey, they have water filters over there, don’t they?

There have been few to no peer-reviewed studies examining the impact of chaff on wildlife and the environment, or humans either, for that matter.  Little is known about the breakdown of chaff in soil or in water.  It doesn’t take a study to know this:  given what chaff is made of, it’s not going to go away soon.

But hey, the Air Force is pretty sure that the stuff won’t hurt anything. Flares being deployed from a F-16

Flares are used to confuse heat-seeking missiles. Most are magnesium pellets ejected from tubes to ignite in the air behind the aircraft. The flares burn at temperatures above 2,000° F.   As hot as magma ejected from a volcano.

The flare pellets burn as they fall to the ground.  To the dry trees and brush below.  The place where there are no roads because it’s wilderness, so fire fighters can’t even get there unless they hike in.

If the flares don’t burn the forest down when they land, at minimum what their deployment will do is add to the feeling that there’s a war’s going on.  Jets screaming overhead.  Explosions blasting day and night.  Blinding lights destroying dark skies.

Bye by peace and quiet.  Farewell tranquility.  Too bad, wilderness. 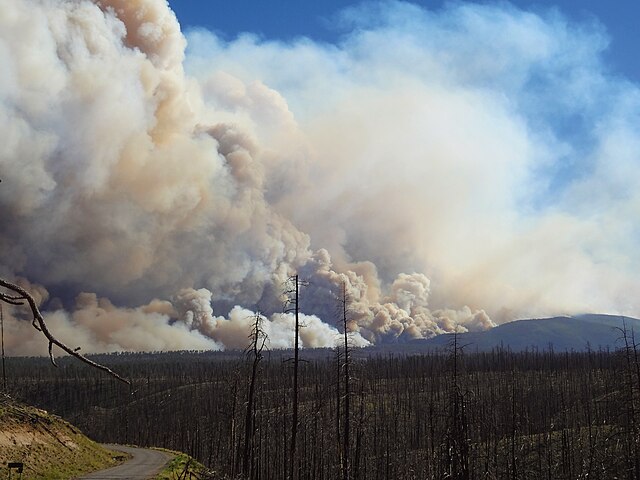 The future of the Gila Wilderness?

What could  they possibly be thinking?

I’m guessing the Air Force is thinking only about the Air Force.  They’re relying on people being so fearful about war that sacrificing the world’s oldest wilderness so fighter pilots have another place to train is an acceptable price.

I don’t know what they’re really thinking, but I do know that the decisions will be made by people who don’t value wild places.

Just think:  the Gila National Forest is where the endangered Mexican wolf is supposed to survive.  Where are the studies on the impacts on the wolves?  And what about the endangered spotted owl.?  And all the other threatened and endangered species in the Gila?   Let’s not forget the impact on the Cosmic Campground (the first International Dark Sky Sanctuary on National Forest System lands and also in North America, located between the Gila Wilderness and the Blue Range Primitive Area).  Has anyone bothered checking into potential damage to the Gila Cliff Dwellings from the vibrations of hourly (or more frequent) low flying jets and/or flare explosions?

No matter who you are, rancher, environmentalist, Continental Divide Trail hiker or biker, hunter, wildlife photographer, or just someone who likes to walk in the woods, it seems to me you’d be as outraged by this Air Force proposal as I am.

While I am not an advocate of petitions, for those who are unwilling or unable to take personal action there is a petition sponsored by the Gila Conservation Coalition at https://www.change.org/p/holloman-air-force-base-military-overflights-threaten-the-gila-wilderness

* Edited due to information received from Catron County Commissioner Anita Hand (District 1) and further research:  The Catron County Commission received a letter about the EIS too late to act on before the scoping period had closed (the Notice of Intent was published August 25, 2017; there should have been a 45 day comment period but the comment deadline was September 15, 2017).  Holloman airspace analyst Alan Shafer has stated that Holloman also sent letters to both Grant County Commission Chair Brett Kasten and County Manager Charlene Webb but Kasten said that he had no recollection of receiving any letter.  Grant County Commission did hold a special meeting to address the issue. but this was after the comment deadline  The only public scoping meetings were held by the Air Force in Carlsbad, Truth or Consequences and Las Cruces.  No scoping meetings were held in Grant or Catron County. [return to top]

Note also that the draft EIS is not available on the Holloman AFB EIS website.  If it exists somewhere, this writer sure can’t find it.